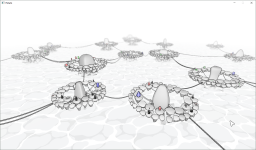 PotatoGame is a procedural generated game about little potatoes with customizable AI (which was only done on paper). The goal is to have them win the game for you by gaining world domination. This was my second large game project (in terms of time and effort spent on it), but eventually I lost interest and motivation after forcing myself to work on it and focusing too much on the future outcome. I’m very proud of this project, but I gave up on ever finishing it.